Book Review: The Baron in the Trees

- January 25, 2015
To date, all of my book reviews on this site have been related to books on education. Which, if you think about it, is really kind of silly. Am I suggesting that non-fiction books about teaching and learning are the only books which can inspire teaching and learning? Of course not. Literature has been inspiring people from all walks of life for centuries. 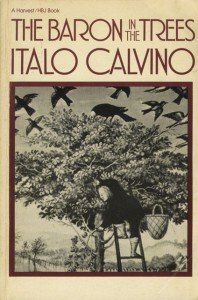 Italo Calvino is my favorite author. His writing is magical, challenging, imaginative, and infused with an unmistakable love of the natural world.


Once upon a time, somewhere between the innocence of childhood and the pluck of the bold rebel, a young Italian nobleman called Cosimo exercised his right to dissent after twelve long years of abiding by the inherent societal norms of his aristocratic title and refused to eat beheaded snails defying parental authority. In order to avoid the wrath of his authoritarian father, Cosimo climbed to the top of an enormous holm oak situated in the garden of the family estate and promised to never touch the ground again for the rest of his life.

It made me wonder about those kids we have all met, the ones who seem like they don't belong, the non-conformists, the ones who see a power structure and challenge it. Normally, the reigning powers that be will halt the behavior, remediate it, attempt to "cure" the individual of their rebellious ways. Like the 18th century aristocracy tried to do to Cosimo. Except he didn't let them. What at first seemed like a childish game from an impudent child, turned into a remarkable life. Cosimo ended up not being the rebel on the outside, but rather a hero to many.

What if we allowed our children to rebel? Do students need a safe place to act out against a society which they might not fully comprehend? How can we provide opportunities for them to challenge the status quo?

It is not as simple as it sounds.

Often, we worry that our children will be left on the outside, isolated and alone, with ideals that don't match the rest of the world around them. I worry about it as a father. I want my son to think for himself, look at the world critically, and carve his own path. Yet, I worry that by doing so he will be too different from others. I want him to challenge power structures, but I also want him to be happy. To live life and enjoy it.

Cosimo stuck to his ideals. Life was not always easy for him. He struggled with depression and lacked certain human traits that we value. But, he possessed other things that we value as well. He was inventive, adaptive, curious. He saw the world like no one else did. From up on the trees, everything looked different, time moved in strange ways, and the patterns of the world were all around him. He was in tune with the forest.

Yet, he could not leave it. He could explore beyond where the line of trees stopped. He could only stare wistfully at the sea and wonder. His choice benefited him, but it also constrained him. Limited his choices and options. He spend his whole life living within those confines, but he never regretted it.

I see the same with learning. We cannot focus on everything, learn all there is to learn. By choosing to focus on one, we forfeit another. Our choices as teachers and learners enable us, but they also constrain us. Like Cosimo, we need to be aware of why we are constraining ourselves, why we are focusing on this, instead of that. And we need to be more in tune with what is enabled by our choices, and how they are going to guide our teaching and learning.