- May 21, 2013
During the next six weeks, my class will be inquiring into ecosystems.  We will be using the Core Ecological Concepts by the Center for Ecoliteracy to orient our exploration.  While the students are inquiring into the patterns and processes that sustain life on earth, I will be following my own inquiry into our learning system.  My guiding question is; how are classrooms like ecosystems? From a systems perspective, there are many systems playing off each other, iterating, folding back on themselves, and expanding. These multiple systems affect one another and are affected by each other. The parts make up the whole, and the whole is made up of the parts. Each series of nested systems is unique to its own sense of time and space. They are systems within systems.

Think of a child. I’m thinking of Kyle, a boy in my class who is incredibly adept with mathematical facts and problem solving. A tall boy, kind of awkward, but in a strangely confident way. He can be a bit short with people, not always polite, and he gets frustrated working with others. He prefers to work alone, and when very engaged in a task, needs a great deal of personal space.

He is a system. Each child in the class is their own system with their own history, their own minds, and their own sense of self. Put those minds together and we have a collective of learners. That collective is its own system, a classroom. It learns, it affects each individual member. The teacher is part of this learning system, connected to them.

Since we are not a public school, we are not connected to a local community of schools. Instead, we have a co-evolutionary relationship with the other international schools in Japan, of which there are many. These schools communicate with each other, they influence each other, and they provide a space for learning from each other. 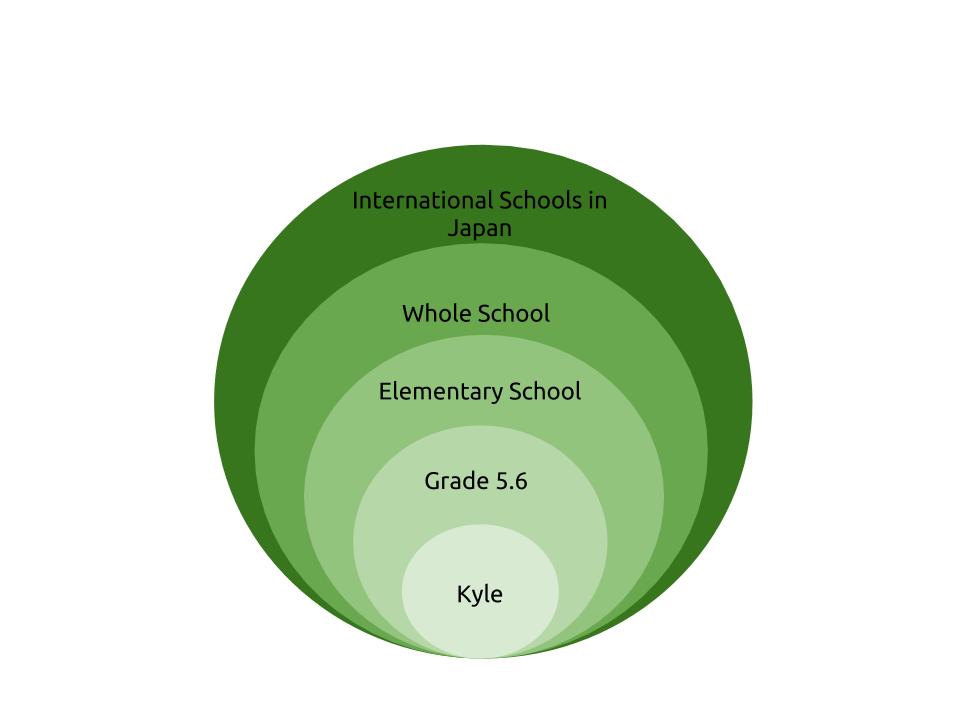 Each one of these circles is a system. You could study each of them in detail, and learn how they operate individually. However, you would not fully understand each individual system without seeing the larger whole in which they are embedded. The effect that each system has its subsystems is determined by the proximity.

You see, Kyle left in April, went to a new school and a new challenge. The effect on the grade ⅚ collective was huge, like a missing finger. We adapted, moved on, and a new sense of what grade ⅚ is has emerged. The effect on the elementary school was also present, but not as deep. We miss Kyle’s leadership and ability to peacekeep solutions to disputes at recess. Moving out to the whole school level, since we are a small school, we feel it every time a student leaves. However, when one leaves, another arrives, and the overall effect is not as great. As for the outer level, I am sure the international schools in Japan are not reeling the lose of Kyle, they would hardly notice.

The time scales and levels of effective relations are dependant on the proximity of the systems. Each system is complex, and each system is made up of agents, be it students, classrooms, or schools. The whole of all these agents allows a greater form to emerge. These agents make the whole so interesting and unique, because they are different, and they way they interact with each other opens new paths to emergent possibilities. The collectives at each level intertwine and wrap around each other and create new levels.