Background:  We are studying forces and motion in our recent science, math, language unit.  As part of a summative assessment, I told the kids on the first day of the unit that they would be throwing an egg of the second floor of the school and trying to create a device (using their knowledge of forces and motion) to make their egg survive the fall.  I wanted them to keep this in the back of their mind as we studied different forces during the unit.  We are keeping track of our learning and reflections on a class wiki.

Emergence:  The other day I forgot to write our nightly ten minute writing exercise in their agenda.  Off the top of my head I said, “Go onto your personal page on the wiki and write about your egg.  Give it a name and tell me something about its history.”  The next day, they came back to school and one of them had drawn a picture and posted it on the wiki, another had written a short story, and another had done a biography.  During morning Tea, they were discussing their egg stories and they started linking them together, having their stories and biographies intertwine.  I told them that they could easily link it on the wiki and they showed them how to link one page to another.  Next thing I know, they had mapped out an entire universe on the whiteboard; they were from Egglandia, Eggartica and Eggistan; all different countries within the world.  They had links to TES (Tohoku Egg School) and their teacher was Mr. Dwegg (that’s me, and I will also probably write a page and stories about this character, joining the group).  They are linked to a human from the human world through some organization called the Egg-Human Friendship Group; and their humans friends are themselves.  It goes on.

I want to encourage this activity and let it grow, but I don’t want to get to involved.  I don’t want it to become school work, I want it to stay as their own thing, but this is so rich with opportunities to really target some of the aspects of their writing that they need work with.  How do I approach this?  Any ideas?

From a system perspective, I find this fascinating when this happens.  Ideas are born out of other ideas and they grow and evolve and change and eventually they take on a life of their own, going above the group and becoming embodied in something larger that the sum of our students.  It is amazing how brains, groups, and cultures all work together to create something new.
Complexity Creativity Education Ideas 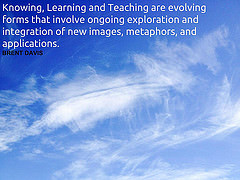